Welcome to the HazMapper Blog.  This is where we will post short, timely summaries of recent natural disaster events from around the world utilizing the soon-to-be publicly available, open-source and web-based HazMapper Google Earth Application.

A widespread tornado outbreak affected the southeastern US on Sunday and Monday, April 12-13, 2020 (Easter weekend). A strong atmospheric frontal system moved rapidly to the northeast across the eastern United States, stretching north from the Gulf of Mexico into southern Canada.  Numerous tornadoes were generated along this frontal system, including two EF4 tornadoes that touched down in southern Mississippi, accounting for 12 of the reported 41 fatalities. 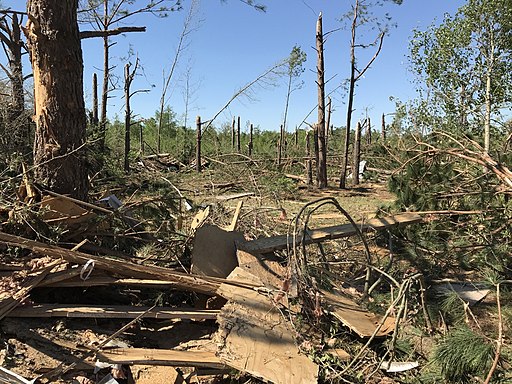 On April 17, The HazMapper application was used to analyze the first available multispectral European Space Agency Sentinel-2 satellite image covering some of the damage area of southern Mississippi, USA — 5 days after the event.

First, below is an screen grab generated from the initial HazMapper output that is centered near Bassfield, MS.

The red and yellow colors represent areas of vegetation loss (decrease in greenness) as observed using the Sentinel-2 imagery.  The linear swaths are two of the EF4 tornadoes that touched down in Mississippi, damaging vegetation as they tracked near to the ground.

In the next image, we’ve taken the results form HazMapper and exported them to to ArcGIS for visual and spatial representation of three of the Mississippi tornado tracks.  The color ramp used represents the relative difference (rd) in the NDVI value. Warmer colors can be interpreted as a greater decrease in green vegetation between the pre-and post-event periods. Less than a week after the event, using only public-access satellite imagery, we can track these ground paths for nearly 60 km!

This image below is a close-up of two of the EF4 tornado tracks as they transited across Covington County, MS. Note the gaps in the rdNDVI loss, which may indicate temporary suspension of ground damage by the tornado, and the apparent synchronous bend in the two tracks, indicating that they were both active and touching down at the same time.

We’ll update the analysis as more imagery becomes available. HazMapper is designed to use many images during analysis, not just a single pre- and post-event image, so this should get better with time! You can explore more of the HazMapper identified tornado tracks in southern Mississippi using an interactive online ArcGIS map platform here.